A global reversal of policy data will bring the rise of state capitalism and the collapse of
neoliberalism as a development model. What should be done now is to support the poor to
become poorer and do not prevent people to new informal understandings as conventional
lending the recent Eurogroup to tackle coronavirus crisis and particularly now with the
acceleration of the crisis that brought the pandemic public debt haircut of private capital and
issue Eurobond.
It’s the only way to overcome the global economic crisis and particularly now with
acceleration crisis that brought the COVID type pandemic – 19. These had told George
Papandreou as prime minister in 2011. He was the only one who had said no to hegemony of
banks and charisma of billions they owe the people in the banks without reducing loans and all
the burdens of taxpayers’. 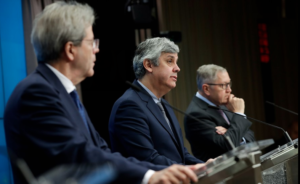 Eventually then the policy of the European Merkel – Sarkozy and Barroso establishment passed.
They preferred to obey the dictates of bankers which is a global big-caste with managerial
positions are getting astronomical amounts due bonus. It’s big-and major shareholders. Now
with the new global crisis is terrible removal with tectonic changes. On the one hand,
necessarily leave the capital to be invested in basic needs such as nutrition and health, and on
the other hand speculative bubbles continually crashing.
This is a domino with tremendous political developments because it forced the political system
in order to save the security of countries by the crisis to ignore the advice of the global
oligarchy. What will happen is something like this where it happened after the second world
war, when to build the country needed strong state intervention to restart the economy plan
Marshall sometimes spoken but not implemented.
The cause of an imminent collapse is the unpopular measures of wealth accumulation, failure of
Neoliberalism as a development model. A global reversal of policy data will bring the rise of
state capitalism necessarily longer and the only way to avoid a new crash very close in time.